Europe is saved if it saves the Sahel 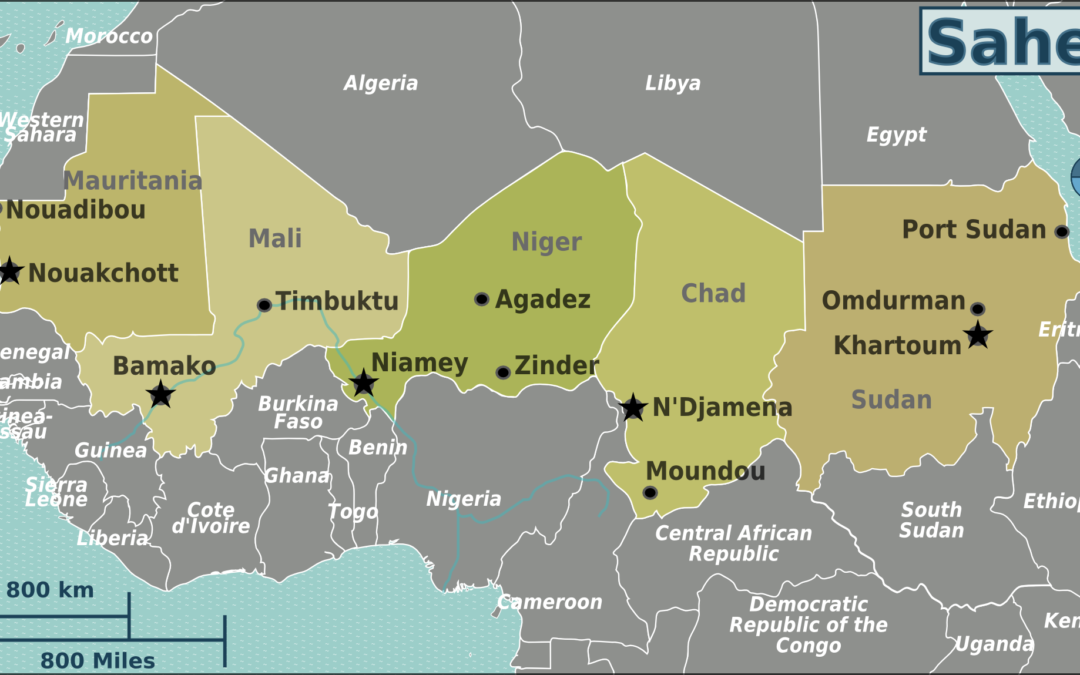 In the last few days, the landing of migrants on the Italian coast has put the spotlight back on the migration issue, which for years has been the subject of disputes between the various European states. Italy (which has seen the Lampedusa hotspot fill up to accommodate almost 2000 people compared to a capacity of 250), for the umpteenth time, has asked the other EU states to take charge of the management of migrants, but reactions have been cold or even absent. Both France and Germany will be voting within the next year, and Macron and Merkel have no intention of “shooting themselves in the foot” by agreeing to accept quotas of migrants on their own soil. Austria, too, has opposed redistribution, indicating instead the will/need to act in Africa to solve the problem. The solution proposed by the government in Vienna is, in the medium-long term, the most desirable, but how can it be implemented if European interests in the Dark Continent continue to diverge?

Why the Sahel interests Europe:

The Sahel is that portion of land that extends from the Atlantic Ocean to the Red Sea: therefore, from Senegal to Eritrea. The countries of the central-western region (up to Chad) during the nineteenth century were part of the French colonial empire (as we will see later, today France still exercisea strong influence on this area, from the cultural, economic and military point of view).The political situation of the area is one of the most chaotic in the international scenario: just think that according to the latest data from the United Nations, 29 million people are in need of humanitarian assistance. As for Europe, the main reasons for interest in the region are of a different order.

First of all, the Sahel is the crossroads of many internal migratory routes. In particular, it is Niger that acts as a collection basin for immigrants and refugees from various countries such as Nigeria, Mali, Burkina Faso. Agadez is the city towards which the vast majority of flows converge; from here, the routes separate to head to Algeria and Libya (whose gateway is the Fezzan, a region characterized by the strong absence of the state and institutions). Stabilizing the region would mean putting a stop to the hemorrhage of migrants coming from these areas and heading towards Europe; in 2020, despite the pandemic, the migration trend has even increased compared to 2019, touching + 134% of arrivals along the Central Mediterranean Route (34,100 migrants) and +46% along the Western Mediterranean Route (35,000 migrants). Moreover, it would allow Libya to face the difficult path of internal stabilization with one less worry (in the North African country, torn by years of civil war, there are more than 270 thousand internally displaced persons).

Secondly, the Sahel has long become a sort of jihadist “safe heaven”. Already in the period 1992-1996 the Sahel had hosted Osama Bin Laden and groups of fighters loyal to him, giving way to Al-Qaeda to expand its network and spread in the region, collaborating with the various tribal groups insurgent against central governments. The business of these criminal formations range from drug trafficking to the management of migration routes, through the sale of weapons and rare earths (which they obtain through theft).

The presence of foreign actors and international dynamics:

The international spotlight towards the Sahel was turned on in 2012/2013, when in Mali the Mouvement National de Libération de l’Azawad (MNLA) rose up, proclaiming the independence of Azawad (north of the country) and the constitution of a Jihadist proto-state. The decision of the separatist groups to move towards the south of the country convinced France to intervene militarily with the Opération Serval, with which the objective of restoring the Malian territorial integrity was achieved, but not that of eradicating the Jihadist militias from the territory. The following year was launched the wider Operation Barkhane, with a regional dimension, aimed at securing all the countries of the G5 Sahel (Mauritania, Mali, Niger, Burkina Faso and Chad).Currently, the mission counts on 5100 military personnel, a large contingent aimed at protecting French prerogatives.

The interests of France are numerous, starting with those of a cultural nature: the French language is in fact widespread in the area (there are many cooperation projects aimed at supporting schooling), and this allows easy communication, thus ensuring the preservation of an influence on governments and local populations. Also from a financial point of view, Paris has strong interests in the area. In fact, starting after the Second World War, the currency used by these countries was the CFA franc, whose value was anchored to that of the French franc. Even after entry into the euro, France has continued to condition the value of the CFA franc, establishing a fixed parity with the single currency, in exchange for the transfer of 50% of the foreign currency reserves of African countries to the French Treasury. Finally, the microcosm of French companies present in many states in the area should not be forgotten: Total (in Mali), Vincent Bolloré’s group (especially in Nigeria) and the Alstom engineering company. In addition, there is the presence of Oran in Niger, from where the company extracts about 3000 tons per year, necessary for the operation of power plants.

Italy also operates in the Sahelian scenario, even if the interests involved are certainly less than those of France, especially from an economic standpoint (in Africa, our exports are worth approx. 3.5% of the total, while imports from the African continent amount to approx. 4.5%). The Belpaese has opened embassies in Niger (2017), Guinea (2018) and Burkina Faso (2019), to which one will be added in Mali. Moreover, it has launched missions of bilateral cooperation on defense with Burkina Faso and Niger (MISIN); just in Niger, near the capital Niamey, it is planned the construction of a logistic hub internally Italiana starting from July, while the 200 men of the special forces recently engaged in the Task Force Takuba will operate mainly in the region of Liptako-Gourma, nerve center of the security point of view and migration. 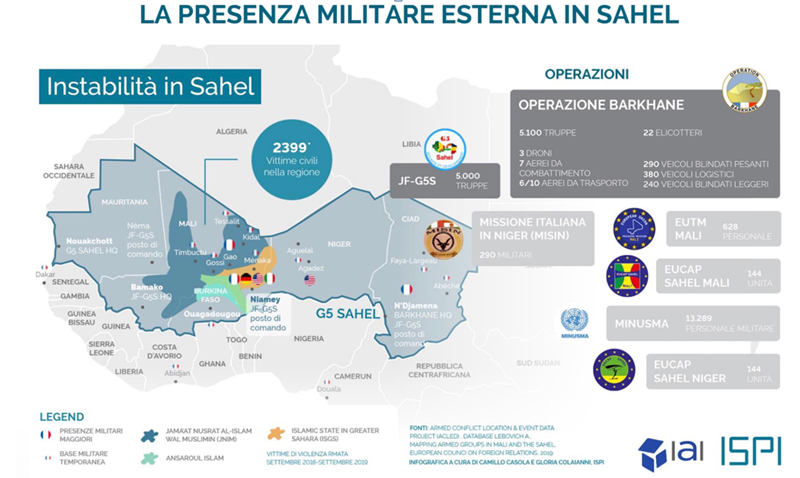 The western presence (through the EUTM, EUCAP and Barkhane missions) in the Sahel is aimed at defending its interests from new international players that have been appearing in the area for years, some more than others. China, for example, in addition to having oil interests in the region, contends with France for the profitable activity of uranium extraction. Beijing aims to expand its influence in the continent from which potentially, in the future, a greater economic growth is expected, and the first successes about the investments made are starting to arrive (for example, Burkina Faso, after years, has stopped recognizing Taiwan as the only Chinese state). Even Turkey, financed with Qatari money, has for years been entering the Sahel, managing, for example, to become a partner of the African Union in 2008. Control of the region would allow Ankara, which sees itself as the champion of the Muslim Brotherhood, to increase its blackmailing power over the European Union with regard to the migration issue.

Given the interests at stake, once again the European Union finds itself at a crossroads: act united or perish, in the sense of losing its role in Africa and once again appearing as a weak player. The Barkhane mission, impressive in terms of the number of men and means employed, remains a French initiative, as does the Takuba task force (although it involves numerous European countries). 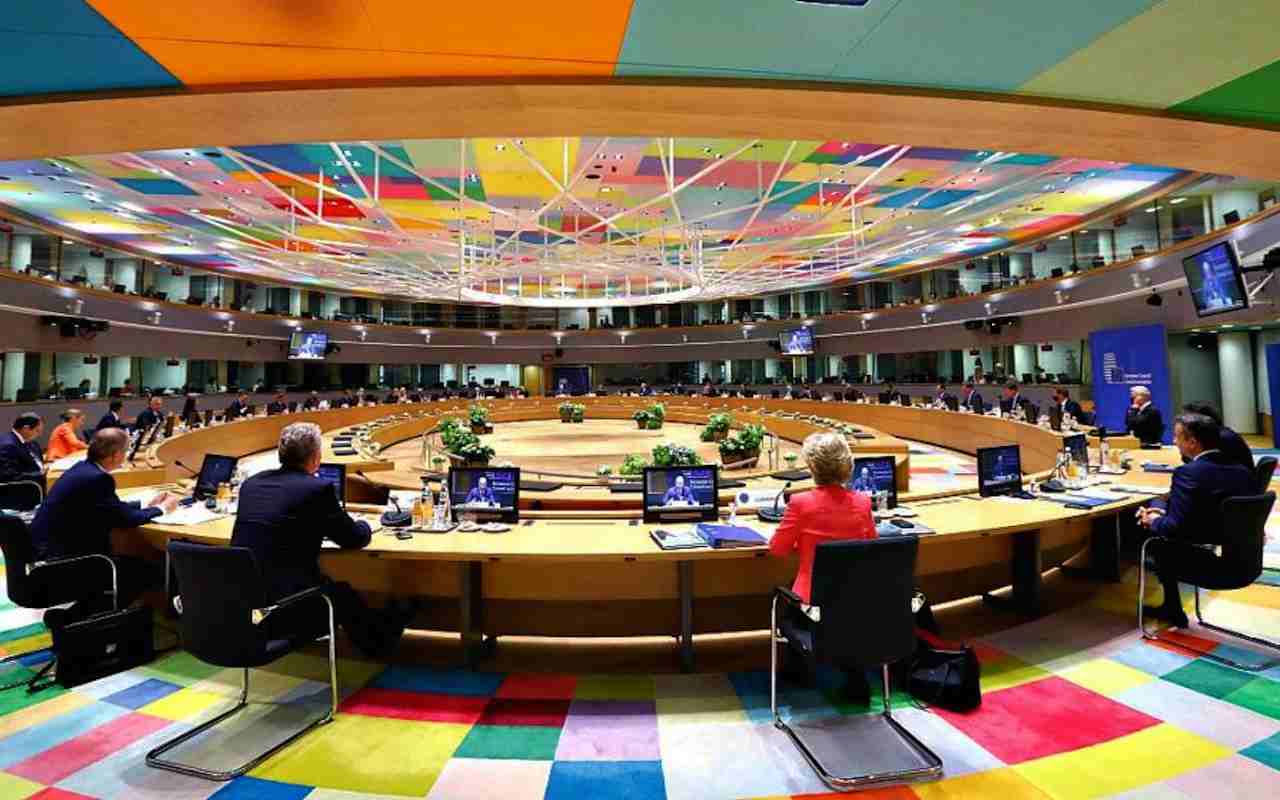 Yet, in recent years, something seems to have changed. In 2016, in fact, the European Union drew up the ‘Global Strategy for the European Union’s Foreign And Security Policy‘, a document that has made it possible to take, at least at the declaratory level, an important step towards the desired strategic autonomy. Among the 5 key priorities, there is also the one related to state and social resilience in the southern and eastern peripheries (therefore the reference to the migration issue is inevitable). Of course, putting these objectives into practice is a long and complex process, and a decisive step seems to have been the Foreign Affairs Council of 16 June 2020, during which a new document called Strategic Compass was drawn up, aimed at strengthening a common defense and security culture at European level. One of the strengths of this tool is, among others, its preparation; in fact, the Union has made a comprehensive and in-depth threat analysis thanks to the work of the EU Intelligence Centre and the EU Military Staff Intelligence.

Clearly, the range of action of the Strategic Compass will have to be complementary to that of the other institutions that contribute to the Union’s security. It is no coincidence that at a recent Council meeting (06/05/2021) this issue was also discussed in the presence of NATO Secretary General Jens Stoltenberg.

With the United States increasingly engaged in containment and in the epoch-making confrontation with China in the Indo-Pacific, the European Union is called upon to assume more and more responsibility, demonstrating that it can play an active role in a world that is now multi-polarised.