DSA agreement: ‘What is illegal offline must also be illegal online’.

After almost a year and a half of negotiations between the Parliament and the Council, the European Union announced on April 23rd, 2022 the agreement on an unprecedented legislative package that will force internet platforms to control the offer of sites, suppressing any illegal content.

“A historic agreement“, with these words, Ursula von der Leyen, President of the EU Commission, described Europe’s green light for the Digital Services Act, a package of rules that obliges big tech to monitor online content and remove fake news, greater protection of activities related to children and also those concerning online sales, with the obligation to remove counterfeit or harmful products and identify sellers. Violations of the rules will be punished with fines amounting to 6% of the company’s turnover.

The agreement comes after the Parliament and the Council reached an agreement in March on the Digital Markets Act (DMA), dedicated to free competition in a field, the digital one, where traditional rules have proved insufficient. Both legislative texts had been proposed in late 2020 by competition commissioners Margrethe Vestager and industry commissioner Thierry Breton. 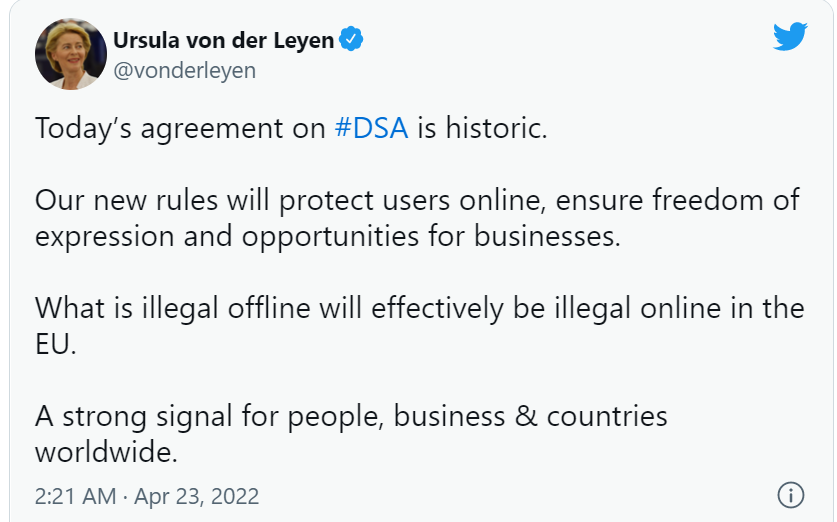 In the meantime, the European Commissioner for the Economy, Paolo Gentiloni, declared that it is “an example for the world. Even the web giants will have rules to respect. Protection of minors, obligation to remove illegal content, freedom of expression”.

On the other hand, the United States – the birthplace of the iPhone, search engines and the most widely used social networks, which could take the world into the so-called metaverse – is struggling to come to an agreement to protect Internet consumers.
Global leadership on technology regulations is taking place more than 3,000 miles from Washington, by European leaders representing 27 nations with 24 languages, who have nonetheless been able to agree on basic online protections for their 450 million citizens.

In the United States, Congress has so far been unable to pass comprehensive regulation to defend consumers and restrain the power of the tech giants, and this is not for lack of trying. In fact, in 25 years, dozens of federal privacy bills have been introduced and eventually abandoned, and the approval processes of many antitrust bills to curb the power of Apple, Amazon, Google and Meta have remained unfinished.

In the meantime, Europe’s ambition is to make the EU’s regulatory framework efficient in such a way as to make the digital space attractive also to operators from other ecosystems on the planet, thus stimulating new investments and the entry of new operators into the European digital ecosystem and putting at the centre the protection of users’ rights and winning their trust.